Writing Under a Full Moon 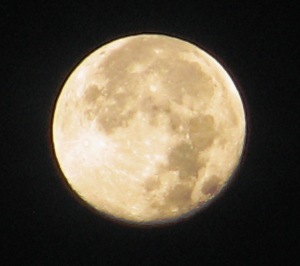 Once in a Blue Moon

An ER study found no difference between full moon and other nights. The Mayo Clinic psychiatric services tracked their visits and found no statistical difference. A notion that doctors and nurses made more errors in patient care under the light and gravitational pull of a full moon didn’t pan out either. It doesn’t matter what day of the week or phase of the moon you schedule your surgery.—However, if your doctor has been up all night looking at the moon, he may be in no condition to do your brain surgery!

Under the light of a full moon, more people may be out and about. If you are unable to sleep due to the bright nocturnal light, your sleep-wake biorhythm is altered. We know sleep deprivation can result in psychosis, but that takes more than a day. Closing the drapes or pulling your shades can block out those ominous disturbing rays of the full moon and allow you to slumber undisturbed.

If you examine gravitational pull as the cause for making us wonder about the full moon’s power, science shows no difference in behavior or happenings. Yes, the high tides occur at full moon, but they also occur at new moon and no one complains then. At new moon, the moon is between the earth and the sun, so actually, the gravitational effects are higher at that time because the sun and moon effects are additive.

What were you doing on August 31st?  Did anything unusual happen? That was a blue moon. The “once in a blue moon” saying just reflects a rarity. By definition, a blue moon is the second full moon in one month. This occurs every 2.7 years, so, it isn’t all that rare but is fun to think about.

The moon’s orbit around earth takes 27.3 days, but the moon phase cycle is 29.53 days. With our months varying in length, the full moon and new moon cycle constantly changes. If you consult www.moongiant.com, this website will keep your lunar thoughts in alignment through the year 2200.

Our next blue moon will occur July 31, 2015—but it won’t really be blue. For some beautiful photos from around the world of the 2012 blue moon, check out http://earthsky.org/space/favorite-photos-of-august-31-2012-blue-moon.

Later this month there are two dates of interest. December twenty-first, which some New Age spiritualists are convinced will be the end of the world—and if we are all still here to celebrate, our next full moon is December 28.

There is still time to flock to one of the major gatherings planned in Mexico, Belize, Guatemala, El Salvador and Honduras, where they will celebrate the end of a 5,000 year era. This is the end of the Mayan “Long Count” calendar which began in 3114 BC. Most do not believe “doomsday” hieroglyphs; instead will partake in festivities marking the beginning of the new Mayan Calendar.

As for me and my lunatic friends, we are celebrating on December 21st like some people in Russia, with our own version of the “Apocalypse kit.” Good times, good friends, good liquor and the beginning of plans to complete all those books in our heads and on our computer hard-drives.  May you have writing success in the coming year.

Author and retired medical doctor with broad interests in writing, flying, photography and outdoor life. She has Indie published 7 books, fiction & non-fiction, all available on Amazon. Writing projects include: multiple books of fiction: a medical thriller series, a psychological thriller set in 1960 co-authored with her sister Bev, and others in process. Dr. Kuffel lives in MT with husband Tom, two dogs and neighborhood deer.
View all posts by bettykuffel →
This entry was posted in Authors of the Flathead, Writing and tagged Blue Moon, Full Moon, Mayan Calendar, New Year. Bookmark the permalink.
Loading Comments...
%d bloggers like this: